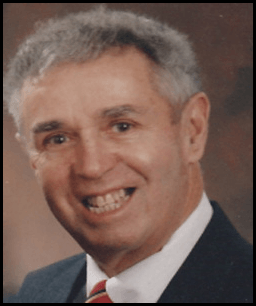 Born in Concord on March 10, 1929 he was the son of the late James H. and Agnes C. (O’Dowd) Dee. As a young man, he worked… on his grandfather’s farm on Bedford Street, Peter’s Spring Farm and assisted his grandfather and father in the daily operations of the family funeral business. He also assisted in the transportation of equipment for the Boston Red Sox. He attended Concord public schools and graduated from Concord High School in 1947 where he was Captain of the Concord High School Basketball team. He graduated from Boston University receiving a Bachelor degree in Education in 1956, a Master’s degree in Education in 1962 and in 1970 a Doctorate in Education.

For 34 years, prior to his retirement, Dr. Dee was a popular science professor at Lesley University in Cambridge. He was a pioneer in advancing the value of hands-on-learning to discover the wonders of the natural world. In 2002, Lesley University awarding Dr. Dee with the honorary title of Professor Emeritus. Previously, during the 1970’s, he taught 4th grade at the Alcott School in Concord and was a camp counselor at Camp Nashoba Day in Littleton during the summer months.

A lifelong Concord resident, he was a Board of Director member and Third Vice- President of the Concord Lions Club. He also served as a Board Member at the Massachusetts General Hospital in Boston. He was a faithful and dedicated communicant and lector at Holy Family Parish of St. Bernard’s Church in Concord where he served as an altar boy during his youth. During the holidays, Norman and his wife, Joan, hosted foreign exchange students at their home in Concord.

An avid sports fan, he enjoyed following Notre Dame football, NE Patriots and the Boston Red Sox. He was a season ticket holder for the BU hockey team and never missed a Beanpot Tournament.

A Funeral Mass was held in Holy Family Parish, Monument Square, Concord, Massachusetts, USA, on February 11th, 2015 but due to multiple storms interment was postponed until March 17, 2015, St Patrick’s Day , in St. Bernard’s Cemetery, Concord, MA. USA. Visiting hours at the Dee Funeral Home were held on Tuesday, February 10th from 2 to 4 and 6 to 8 pm.

Arrangements are under the care of Susan M. Dee and Charles W. Dee, Jr., Dee Funeral Home of Concord. To share a remembrance in Dr. Dee’s guestbook visit www.deefuneralhome.com